The Forest Department of Karnataka has caught some 50 sellers illegally trading wildlife parts in the last four months.

The sellers have opted to use digital selling platforms like OLX, Alibaba, Quickr, and eBay to illegally sell wildlife parts.

According to the Convention on International Trade in Endangered Species of Wild Fauna, and Flora (CITES), a website for endangered species, three tigers are killed in India every month, and 460tigers have been killed in the past 10 years.

Recently, the Wildlife Control Bureau tied up with the online selling platform OLX, and since then it has been cracking down on a lot of people who have been selling animal parts on the website.

It had started Operation Wildnet to tackle this problem of illegal trade and also to make a breakthrough by tracking down sellers of monitor lizard penises, which is illegal because the lizards are protected species under India’s Wildlife Protection Act.

K.N. Kumar, the Assistant Commissioner of Police, said, “We have started tracking down all the people who are selling parts of animals. It is a threat to the wildlife of the country.”

The Wildlife Crime Control Bureau (WCCB) officer, M Semmaran, said, “We have caught a lot of people who sell animal parts in the city, but with this new digital era, a lot of sellers are using the Dark Web to sell animal body parts illegally.

With the help of the Cybercrime bureau, we are tracking down such people from the dark web.” He added, “We will make sure that the advertisements of animals that are protected under the Indian Wildlife Protection Act stop as soon as possible.”

Two years ago, India banned imports and exports of skins of crocodiles and fur of animals like a fox to highlight the suffering of these reptiles and mammals.

Krishnan, who works for the Federation of Animal Rights Organization, said, “It is a shame that people are still selling animals and their body parts through the Internet. There must be a curb on the sale. I don’t think that the government can do much about it unless they tie up with private animal NGOs.”

The Indian Wildlife Act, 1972, is an act that the Parliament of India enacted for the protection of plants and animal species. Offences related to trade and commerce in trophies, animals articles, etc. derived from certain animal signifies a term of imprisonment up to three years and/or a fine up to Rs. 25,000. 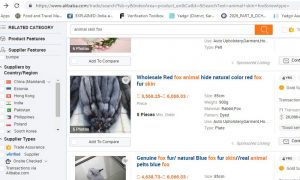