There are around 35 million fewer women in the country compared to men.

A report from the United Nation’s International Children’s Emergency Fund (UNICEF) states that in 1901 there were 3.2 million fewer women in India compared to men. It adds, “A hundred years later the deficit increased over 10 times to 35 million at the time of the 2001Census 2001.” 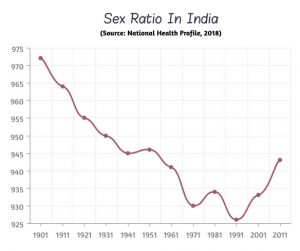 The UNICEF report attributes various causes to the decline such as female infanticide, abortions female feticide, and various other violent practices meted out to girls children all over India. Abortion on the basis of the gender of the fetus is a common practice mostly in the northern states.

The 2011 Census states that the Haryana has the lowest Child Sex Ratio at 834 and Arunachal Pradesh has the highest at 972.  In Karnataka, the Child Sex Ratio stands at 946 which is a decline from 965 in the 2001 Census.

Bangalore has the lowest sex ratio among all the districts in Karnataka. According to the 2011 Census, the sex ratio in Bangalore stands at 908, same as the last Census in 2001. 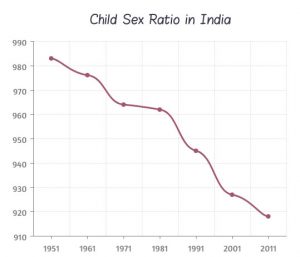 Saaniya Nanda, a gynecologist, said, “Sex-selective abortions can be attributed as the major cause from such a weak sex ratio in Bangalore, as well as in India.”

Many families, who are deeply rooted in their patriarchal ways consider a girl child as a burden. To them, a male child is more lucrative as he will eventually become a source of income, in contrast to a girl child as they will have to pay for her dowry. In villages or even urban areas, doctors do ultrasonography for sex detection although it is prohibited by law.

She also added that women are generally considered weaker sex and traditional patriarchal society has always tried to avoid the burden of a girl child, that has resulted in an overall decline in the sex ratio of the country.