The last published survey and analysis dates back to  2014

The Central Ground Water Board (CGWB) has not published the reports on the hydro chemical data of the ground water in Bangalore Urban district since 2014.

According to one of the officials from the Data Resource Department of CGWB, four surveys are conducted every year, one in each season, and a consolidated report is published by the end of each year.

Borewells and dug wells are excavated by the authority exclusively for monitoring purposes. Samples from 15 different places in Bangalore Urban district are taken to be analyzed for hydro-chemical elements of the groundwater, or in simple terms, the groundwater quality.

The last available report on groundwater quality, in 2014, shows a very high level of nitrate in most places. The maximum permissible level of nitrate in drinking water, according to the Environmental Protection Agency (EPA), is 10 mg/l.  Six out of the 15 places sampled for the survey had nitrate levels ranging from 11-45 mg/l. 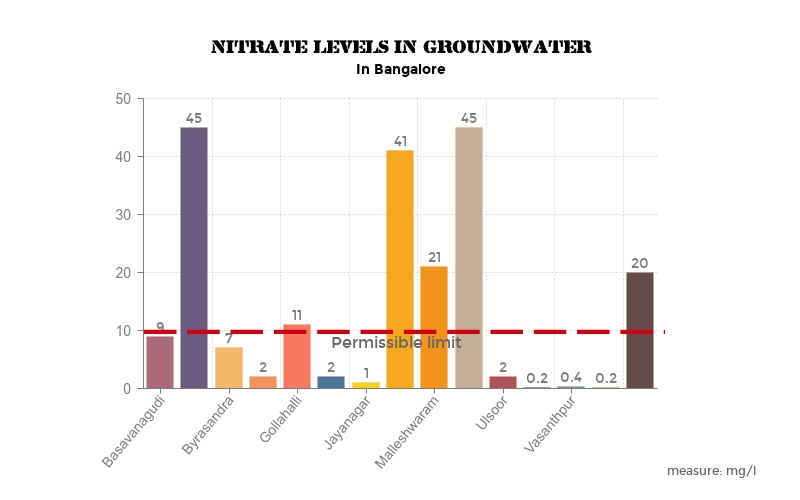 High levels of nitrate in drinking water is a primary cause of “blue baby syndrome” in infants. When a large quantity of nitrate is consumed by infants, it is converted in nitrite in their digestive system. This nitrite reacts with the hemoglobin and decreases its oxygen carrying capacity.

Often this leads to congenital heart diseases. In adults, low oxygen level due to nitrite reaction in the blood leads to severe headaches, lightheadedness, palpitation, confusion, cyanosis, and discoloration of the skin.

The report also indicated that in certain places, the groundwater has more than the permissible limit of chloride. The chloride content in the groundwater in Srinagar is 330 mg/l while the permissible limit is up to a maximum of 250 mg/l. Although excess chloride in water is not harmful to human, it can cause damage to plants, plumbing and irrigation appliances, and water heaters due to its high corrosivity.

According to the officials from CGWB, there has been a mass transfer in the departments of groundwater authority. New people have been appointed in the laboratories, resource department, and other places who need time to settle down. So although the survey has been carried out in 2015, 2016, 2017 and 2018, no analysis has taken place neither any report was published.

According to a study by Karnataka Department of Mines and Geology, in 2013, called “Groundwater Hydrology and Groundwater quality in and around Bangalore”, 31 percent of the water samples collected from 2209 groundwater samples is not drinkable.

The study also says “Groundwater, once contaminated is difficult to bring back to the required drinking water standards. The cost of treatment of contaminated water is predicted to be enormous in the city of Bangalore. Among 2209 of the groundwater samples analyzed, the nitrate content in excess of the desirable/permissible limit is found in 638 samples (29 percent), iron in 214 samples (10 percent), total hardness in 185 samples (8.5 percent) and fluoride in 14 samples (0.6 percent)”.

According to the website of Bangalore Urban Metabolism Project (BUMP), a large portion of the total water consumption in areas like Gandhinagar (51 percent), Chickpet (33 percent), Sampagni ram Nagar (30 percent) comes from groundwater resources.

Hence, a recorded history of water contamination and the lack of recent data put the lives of all the people in these areas and many more in potential danger.

Pandemic and Cancer, a double whammy for patients