A Report by the World Health Organization (WHO) states that India ranks first in being the most depressed country in the world.

Bengaluru, Nov. 19, 2018: With the population of 122.46 crore, India ranks first in being the most depressed country in the world, according to a report by WHO. The report says that it is common in the early adolescents and in the late adolescents period. 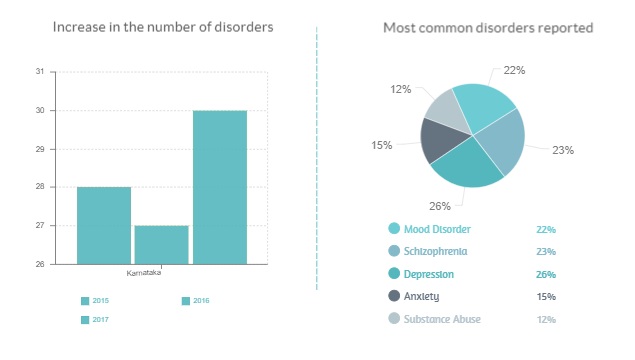 According to the annual report by NIMHANS, they have seen a rise by 13.7 percentpatients that come regularly for treatment and therapy. The report also says that the mental morbidity is more among males than females, with a higher prevalence of anxiety, mood swings, schizophrenia and bipolar disorders.

B.A Sachdeva, a Child Psychologist in NIMHANS, said, ”Every year, when NIMHANS publishes a report, there is an increase in the number of people seeking help for their mental illness. The rise in these numbers are shocking and there must be a solution behind this.” She added, “A lot of people don’t even know that they are suffering from a mental disorder. The parents that come for counseling for their children think that however their children are behaving is perfectly normal.”

The Softcopy spoke to some of the victims who are diagnosed with various mental disorders. Siddharth Muke, 17 year old, residing in Mumbai has recently been diagnosed with bipolar, anxiety and depression. He said, “My parents didn’t believe me until I took them with me to the psychiatrist. Whenever I used to tell my parents what I am going through, they used to ask me to take rest.”

This surprising rise in the numbers of people treated with mental disorders is also due to an increase in the awareness.”The reason behind this would be increase in stress and a lot of pressure, which is due to a lot of competition.” said, Dr N Janakiraman, a retired psychiatrist, who now runs his own Brain Clinic in Bengaluru.

He added, “Removing everything and putting something in a person’s brain is a converse paradigm. The increase in the numbers mean that the problem was always there, just that now a lot of people have started seeking help from psychiatrists.”

1 thought on “Every Sixth Person in India Seeks Mental Help”