A rising number of shared working spaces all across the country is a boon to entrepreneurs and small start-ups.

Shared working spaces in the city have become popular in the city due to the increase in the price of real estate. Bangalore has more than 50 co-working companies like WeWork, Regus, 91SpringBoard, SNEED, BHIVE, Awfis, iKeva, and Innov8, to name a few.

Co-working spaces have private cabins alongside open workstations. An office floor, where different companies rent a particular portion of an area, mostly small to medium sized startups, is a co-working space.  It offers services like high-speed wi-fi, conference rooms, scanners and printers, power back-up, games/chill zones and cafes and eateries in the compound. It also stays open 24/7, providing all time access for the employees.

Mohit Yadav, Manager at SNEED, says, “ Earlier the market was organised in such a manner that, every company wanted a dedicated office, either one or two floors. But when the start up business started blooming, small teams of 15-16 people could bot afford an entire office. They started preferring shared working spaces that were easy on the pocket. So then gradually came the shift from old school to co work offices. Even big companies like Flipkart and Amazon are now shifting to co working spaces. An average co work office floor is 20,000 sq ft that can easily accommodate 6-7 companies. Usually we have 20 cubicles alongside 2-10 seater cabins in each office floor. We are currently operating from Bangalore and dealing with more than 400 clients”

Yadav added, “There are currently around 1,000 co-working spaces in India.”

Emmanuel Joseph, manager at BHIVE, says, “We have an office space of 33, 000 sq ft that accommodates around 40 different companies. We have a central common area and reception that is also the game zone. It includes a foosball table, a pool table, a table tennis setup, a cafeteria,  a vending machine and water purifiers. We have receptionists and manager and a set of cleaning staff as well.”

Azhar Khurshid, Co-Founder and CEO of ‘Emosync’, a mental health start-up, says, “Personal offices might look neat, but they usually burn a hole in your pocket. Finding a cost-effective office is difficult enough. As an early stage start-up, it is very important to keep the burn rate low. A start-up thrives on ideas and feedbacks and Co-working spaces are not just about sharing an office. It creates an opportunity for people to network amongst themselves, and even brainstorm for new ideas.”

Talking about a possible downside to sharing working space, Khurshid says, “Different ideas, if irrelevant to a certain start-up, will eventually become noise, which will affect the efficiency of an individual, or even the whole team. Although, I would prefer a co-working space because having a number of highly passionate people around you will eventually boost your confidence as well. I would rather take the risk of getting irrelevant ideas, as long as new ideas are being discussed.” 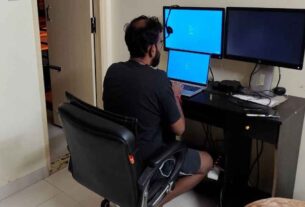