Cyclone Asani made landfall yesterday in Andhra Pradesh between Machlipatnam and Kakinada.

Cyclone Asani has been easy on Andhra Pradesh, with light rainfall and no major damage. Chief Minister Jagan Mihan Reddy reviewed the situation. He said there have been no casualties.

Prasad from the Eluru control room said the cyclone has passed the area. There has been slight rain and a few fallen trees. “District control rooms here are in chaos,” he said.

Seshasri, an administrator in Andhra Pradesh State Disaster Management Authority said, “Eight districts including Nellore will have more rainfall. We have received reports from all districts and are currently collating it. As for now, no casualties or major damage has been reported.”

Guna, a resident of Kakinada said that it is very cloudy here but no rain as of now. Tanuku, Ravulapalem, Jangareddy Gudem and Tadepalli Gudem are facing heavy rainfall and people have been asked to stay indoors. 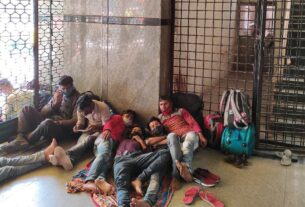 Passengers in limbo as trains cancelled