Somewhere between Athashri road in Whitefield, a small stone paved road diverts on the right. A  JCB and a tractor stationed in the middle of the road hints of an ongoing road construction. Next to the JCB, small green plants shoot up through the cracks in the rocks.

The paved road goes 400 metres ahead and stops abruptly. After that a lush green patch starts, saturated with birds’ chirps and native tones. The Pattandur Agraha Lake has been split into two halves by a narrow stretch muddy road in the centre.

The stretch has been contentious for the last five years after BBMP had decided to build an 80-feet-wide road near the lake according to the Revised Master Plan 2015 (RMP).

A twist in facts

Sandeep Anirudhan, one of the activists fighting for the lake recently had a police case filed against him under Section 153 and 186 of the IPC. The case has been filed   for spreading “false propaganda” on social media about the lake encroachment.

Ravi, Chief Engineer, BBMP said the road does not violate the buffer zone of the lake. While another BBMP engineer was quoted saying, the lake does not exist.

The lake has not been surveyed by the BBMP.However, comparing the Revenue Map of 1876 and National Green Tribunal Rules, 140m section of the road is on primary Rajakaluve and 85 meter section on the road is on the buffer region, a review of Environmental Impact and Statutory Status notes.

The NGT rules also states that no construction can be done within 30 m of lake boundary and 50m from the edge of primary Rajakulave.

Additionally, RMP 2015 shows the area as an industrial area completely erasing the existence of Pattandur Agraha Lake. A comparison between 1876 survey map with the current revenue map on satellite suggests that southern extent of the lake area has been already reduced in the last 10 years.

Ramesh, a local resident and also a certified snake catcher had grown up swimming in the lake since when he was 16.

“We often used to come in the lake and catch tetras or tiger barb fishes and sell them in aquarium shops in Whitefield,” he said. “The lake was more than 13 acres and had crystal clear water,” he added.

Ramesh used to catch snakes and release them near the lake. But he stopped coming to the lake after 2014, when the encroachment had started.

Sandeep said the road construction began in 2017; however its disruption started in 2013 when private contractors started dumping trash at the corner of the lake.

Bharat, a nature photographer and also an enthusiast spent one year in 2016 documenting photographic evidence of the flora and fauna in the area.

He has photographic evidence of more than 150 unique bird species, 25 butterfly species and 100 native plant species. “But when I came back last year, I found only 30 percent of those species remaining,” he said.

Today,   the lake is hardly visible from outside. Rest of the area has been filled with sand, mud and other items.

A small Munishwara Swamy temple at the side of the lake stood with it for at least 100 years. Bharat who documented the area, dated a banyan tree next to the temple to more than 75 years.

A woman, in her 70s, who often comes here to pick grass for making broomsticks, said the temple has been here for a long time. The temple is also famous for animal sacrifices on special occasions or on Sundays.

However, recently, she had stopped visiting the place because with the grass gone, she doesn’t find the stems to make broomsticks.

An inscription dated to 1043 AD notes that the lake was constructed under the orders of Rajendra Chola to mark the 32nd year of the rule.

A historical stone inscription from 1043 CE lying in a graveyard next to the lake reads, “He who thinks of injuring this [water body] shall incur sins of those who have died between Ganges and the Kumari.”

The 1876 British Map of Pattandur Agrahara Village has also identified the water body as a lake.

In December2021, a school which was in the way of the planned road was to be demolished. The school had filed a complaint with the Karnataka High Court, and the construction was temporarily halted.

However, this year fresh notices have been served by the BBMP and the construction is ongoing.

“How can they demolish a school for construction of a road?”  Sandeep asked. “Such encroachments should be stopped completely,” he added.

Of the 204 lakes in BBMP area, 131 are encroached and only 20 are completely free of any kind of encroachment, according to a detailed document on encroachment of lakes in and around the city, a report states.

Sandeep has recently been bailed out of jail. “If they do not withdraw the FIRs filed against me, I will approach the court. However, the fight continues,” he said. 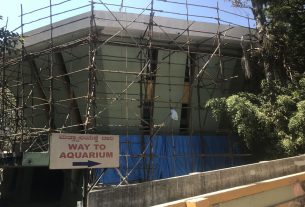