Consumers find products at artisan bazaars to be highly-priced.

Artisans in the Artisan Bazaar who come from outside Karnataka spend a lot of money on living costs and transport, thereby losing out on profits.

A stall owner from Rajasthan at the bazaar, Rajini Sripathy said, “My profits have fallen by 50 percent vand the profits which I am currently making are just enough to sustain my living expenditure.” He added that out of Rs. 25,000 he earned from the sale, only Rs. 5,000 is left after the expenses.

Another shopkeeper from West Bengal at the Artisan Bazaar, Din Bandur said, “The money I get from the sale is only enough to manage our stay here. The profit is nil.”

Harish is selling handicrafts made by the tribal people from North Karnataka, Hubli, Hampi, and some parts of Andhra Pradesh and Kerala in the bazaar. He said, “Before Covid-19, the crowd was good, now we are stuck.”

He added that 20 percent of their profits go into the transportation of goods from the tribal areas to Bangalore.

However, some artisans and sellers from Karnataka are able to make nominal sales at the Artisan Bazaar. Raj Kalburgi, a Karnataka-based attire stall owner said, “Before the pandemic, we used to make a profit of Rs. 10 lakh approximately in the 10 days of the bazaar. But our sales stand at Rs. 30,000 over the last three days including the weekend. But the business is picking up.”

Other artisans are still struggling to make profits as customers think the products are expensive. The transportation and living cost is the reason for the price hike of products in the artisan bazaar.

A visitor at the Artisan Bazaar, J. Swapna said, “We can see so many varieties of products from all over India.  Some are overpriced like handicrafts.” Most craft materials sold in the bazaar were by  60 artisans from other states.

Naveen. G, manager of the artisan bazaar said, “In 2019, we had 100 plus stalls but now we have only 70. We were earning Rs. three lakhs back then but now it is decreased to Rs. one lakh. Most of the sellers here are artisans themselves. In the bazaar, only 10 stalls are from Karnataka, and others are from other parts of the country.”

Karnataka Chitrakala Parishad in association with Astab and Grand Flea Market has organized the Artisan Bazaar that started on November 26, 2021 and will end on December 6, 2021. Chetan, Economics professor at Acharya Institute of Graduate Studies said, “Offline sales of the artistic products are the best option. Keeping in mind the high cost of transportation, it is better to boost the sales online.”

Karnataka journalist fund gets no cash

Start-ups at a standstill due to the pandemic 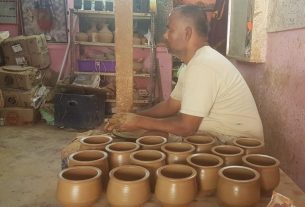