The  poisonous Styrene gas leak from the explosion seven months ago still haunts many people in the surrounding villages.

Visakhapatnam: After seven months of the gas leak, most people who lived in surrounding areas of the L.G Polymers Company are still suffering from health-related side effects.

Nearly 45 to 60 people in villages around L.G Polymers Company suffer from fatigue, loss of appetite, sore throat and redness of the skin due to exposure to styrene gas.

The gas leak has had a huge impact on older people, younger children, and mostly on pregnant women from the surrounding villages. “We are not as active now as we were earlier; even a little walking can be very tiring. Due to a gas leak, small children are not active,” said Mindi Nagaraju, one of the gas leak victims in R R Venkatapuram. He added that most plants in the company’s vicinity were severely damaged.

“We still have eye strain, sore throats, and are unable to speak properly. After inhaling the leaked poisonous Styrene gas, a few pregnant women cannot keep the food they eat. ,” said Ms.Kumari, Mr. Mindi Nagaraju, and Mr. Ramakrishna, all gas leak victims in Venkatapuram and Gopalapatnam.

Mr. Sai, A clinical pharmacist in SR hospital said that around 45 people visit the hospital with the side effects like throat pain and loss of appetite, even now.

These victims also complained about the quality of the treatment. They said that doctors at the YSR hospital, which was built for gas leak victims, just prescribe tablets without any checkup. Due to this reason they go to the nearby private hospitals for checkup.

“Most people in R R Venkatapuram feel that they are suffering from shortness of breath at night. One fetus also died due to the mother inhaling the toxic gas,” said Gopalam, Sarpanch(village head) for Venkatapuram.

Anganwadi workers in R R Venkatapuram said that over 30 people in Venkatapuram and Gopalapatnam are suffering from eye strain, spots on the face and body due to the gas leak.

Ramakrishna, a former Member of the Legislative Assembly (MLA) said, “There are still a lot of people in my village who are affected by styrene gas but not everyone has applied for compensation..  The government has also not yet given Rs.10,000 each to the gas leak victims in R R Venkatapuram.”  He added that police officers did not respond even though victims have complained many times about the side effects after seven months.

Mr. Subhramanyam, a clinical administrator in Care Hospital said that about 50 people were admitted to the hospital when the gas leaked. “Some people still come to our hospital with breathing problems but the recovery rate has been low,” he said.

Venkatalaxmi, Community and Health Service worker in RR Venkatapuram said that due to a lack of testing and improper treatment most people go to the King George Hospital in Visakhapatnam. Shefurther said, “Health-related side effects are still the same for the older people, blood pressure and sugar patients so they need a body scan.”

Shanti Kota, a medical officer in YSR government hospital says, “Many gas leak victims have recovered now. At least 30 to 40 people are coming to my hospital to take regular tablets. Patients are reduced as they go to  city hospitals for better treatment.” 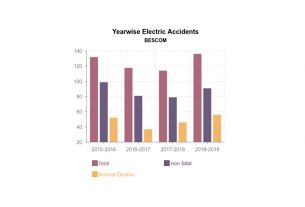