The Motor Vehicles Act specifies the fine for illegal parking, but there are no proper laws which define the requirements of a parking area.

Two-wheelers parked right under a high voltage transformer on Main Guard Cross Road in a no-parking zone in Shivajinagar creates a potential threat of an accident due to the electromagnetic field around the transformer.

The Bangalore Electricity Supply Company (BESCOM) transformer is right outside the boundary wall of the Defence Land in Commercial Street. Two wheelers are parked under it and the parking continues up to 50 meters. Two rusted no-parking boards fail to grab the attention of commuters who park their vehicles in line just next to it.

A research paper titled “Study on Health effects by Electromagnetic Fields” states that vehicles parked under extremely high voltage lines develop an electrostatic field and can cause a discharge current to flow through a human being standing on the ground, in contact with the parked vehicle. Vehicles parked under high voltage transmission lines must be at a distance of 17 metres and 20 metres away from345kV and400kV lines respectively.

A commuter, who was parking his scooter in the zone said, “I am parking my bike temporarily and will be back within half an hour.” Another commuter told The Softcopy that he had been parking his motorbike for many years in the same place and no mishap had ever occurred.

Traffic police constable Sanjeevappa, positioned near the traffic control room said that it was not safe to park a vehicle under or near a high voltage transformer.  The vehicles should not be parked there.C. Kavitha, the Traffic and Planning officer at the Traffic Control Room, confirmed that the parking in that area was illegal. She said, “We don’t know whether this practice started before the transformer was there. In any case, BESCOM is supposed to move these transformers away from the ground. This sort of parking is extremely dangerous. Even a spark can kill or grounding can also be fatal. I will take notice of this and speak to the inspector.”

Mohommad Kashif, the officer stationed at the BESCOM office in Tasker town, near the site in question, said, “We can’t keep a check on all the people who park their vehicles near the transformer. We reprimand them, but still this practice continues. This transformer has been there for the past 20 years. People even hit the transformer or the barricades while removing their vehicles. The traffic police needs to do something about it.”

He mentioned that this wasn’t the only case of illegal parking near high voltage transformers. “In Russell Market, there is a transformer positioned near a public toilet. Many people park their vehicles at a distance of one foot from the transformer. This is dangerous and the traffic police needs to intervene.”

Traffic expert Mr. M.N. Sreehari said that, “Commuters should not park in such areas which are not fit for parking. The traffic police should be stricter while enforcing rules related to parking. People will park in such dangerous areas thinking nothing will happen to them. It is the responsibility of the traffic police to designate specific spots for parking in crowded places like markets. Let them start paid parking, but at least the area should be a safe zone.” 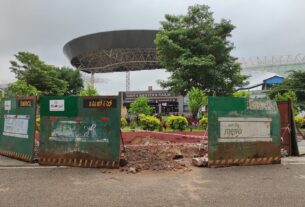