Bengaluru:Despite initial fears of a shortage, green crackers used in Diwali this year have prevented the quality of air from deteriorating in the city after the festival.

Data from the Central Pollution Control Board (CPCB) show that the Air Quality Index (AQI) in the city mostly remained in the “good” or “satisfactory” level this year. Out of the ten air quality-monitoring stations managed by the Karnataka State Pollution Control Board (KSPCB) and the CPCB, only Jayanagar station recorded an AQI of 108, in the “moderate” or “yellow” category.

In 2018, eight of these stations had recorded “moderate” AQI. The AQI, which is an aggregate index of individual pollutant concentrations, is used to estimate the quality of air by measuring the air pollution in an area. It has six categories.

Mr. Syed Khaja Mohiddin, Senior Environment Officer, KSPCB, said, “This year, quite a few applications from fireworks manufacturers were rejected by the Petroleum and Explosives Safety Organisation (PESO). This acted as a major check against any kind of manufacturing which did not conform to the standards for green crackers.”

A copy of a letter from Mr. M. K. Jhala, Joint Chief Controller of Explosives, PESO, shows that out of 84 applications received from manufacturers, 24 were rejected.

Mr. Mohiddin adds, “There was also a lot of awareness among the citizens of Bengaluru with respect to air pollution this year. The consumer demand for green crackers was high. So, the inclination this year was to celebrate the festival in a more eco-friendly manner.”

Experts, however, warn that green crackers by themselves will not bring down pollution levels and there need not be too much enthusiasm about this initiative. Mr. Suresh Heblikar, an environmentalist from Eco Watch, said, “The idea behind this initiative might be good, but one must not forget that India is a traditional country and we celebrate Diwali only once a year. Burning crackers is definitely entertaining and there is nothing wrong in that. The focus should be on finding ways to curb pollution as a whole, not just on Diwali.”

“Every country has firecrackers. They are a necessary part of celebration,” he added. “Also, forcible implementation of green crackers without training the manufacturers of normal firecrackers, like in Sivakasi, will mean a loss of livelihood for those poor people.”

Out of 15 applications received from manufacturers in Sivakasi this year, 10 were rejected, the PESO letter shows. An official from the Tamil Nadu Fireworks and Amorces Manufacturers’ Association refused to comment, saying the matter was sub judice.

Green crackers cause lesser harm to the environment than normal firecrackers. Their use of banned chemicals like Barium is minimal and they do not allow dust to rise after having exploded, thus reducing the contamination of air.

The formulation for green crackers was developed by the Council for Scientific and Industrial Research (CSIR) – National Environmental Engineering Research Institute (NEERI) after the Supreme Court’s order in 2018 allowing the bursting of low-emission crackers. 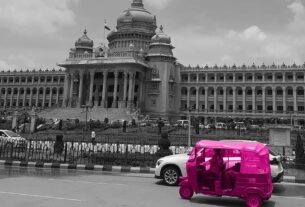 No green signal yet for Pink autos