Transport drivers ignoring the uniform law are in lakhs every year. Under Motor vehicle (Amendment) Bill, 2019 the fine is to be increased.

The Karnataka Motor Vehicles Rules 1989 states that any driver on duty, should wear a uniform of a khaki bush coat and khaki trousers as they need to be recognized in public and anyone caught not wearing a uniform shall be fined Rs. 100. Now in the Motor Vehicles (Amendment) Bill, 2019 which is to come into effect from September 1, 2019 the fine will be Rs. 1000. Sub-Inspector Anita said, “The fine is now Rs. 1000 which will be implemented from September. It is Rs. 100 until now.”

The drivers find it “too much of work” to wear the uniform every day. A cab driver named Vainatheya  K said, “who’ll wear that for the whole day! We keep it and wear it in the areas where the police is active.”

Drivers near Kumbalgudu have other reason for not wearing the uniform. The police in the Kumbalgudu area are local residents, so they don’t catch them. An auto driver from Kumbalgudu named  Rama said, “the police officers are the local of the area. So everything is adjusted with them….now they don’t ask for the uniform….we wear it when we go to the city.”

Traffic management expert Mr. M.N. Srihari  said, “The authority of the online cab booking organization should be accountable for this and the RTO and the Traffic police department should  be stricter with fine amount if the offence is committed more than once.” 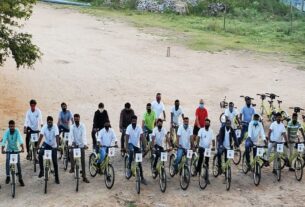 5 thoughts on “Over 3L drivers fined for no uniform”