Skip to content
Home | Sports | Talent, not age should be criteria: Aparna Popat

Aparna Popat, former CWG silver medallist in badminton, spoke about Srikanth becoming World No.1 and more during her interview with The Softcopy.

Bangalore, April 12 2018: India secured their first ever team Gold medal in Badminton at the Commonwealth Games on Monday, when they defeated Malaysia 3-1. A combined team effort from all players ensured that the Malaysian shuttlers had to settle for silver, as their Indian counterpart ended a consistent winning streakwith a top-of-the podium finish.

Aparna Popat, who won the silver medal at the 1998 Commonwealth Games in Kuala Lumpur, spoke to The Softcopy about young Indian athletes succeeding, the rise of Kidambi Srikanth to World No. 1 and more.

1.A lot of young Indian athletes have succeeded at the Commonwealth Games. Do you feel this is way forward for India, to bank on the youth at big events?

A: I think you need to focus on talent, in short. It does not matter what age. It could be a Manu Bhaker( Indian shooter), aged 16 or Chirag Shetty( Indian badminton player) aged 20.

Age should not be something that should be defined. Instead, we should look at the talent and give them the best possible support.

The more we clean up the system and get this straight, the more chances we have. At CWG, it is not just the medals we need to look at, but it is about the performances and if you have exceeded your personal best, then that should count for an improvement or an achievement.

2. Kidambi Srikanth is set to become the Number 1 ranked Men’s Singles shuttler this week. What would you attribute the reasons for his transformation from a not-so consistent player to now becoming the World No.1?

A: I think over the years, we have always spoken about Srikanth as a very talented player. It was a matter of time. I think Gopi (Pullela Gopichand) realised this very early and he persisted him in spite of him being so inconsistent.

I think every player at some point comes into their own. It happened for Srikanth in 2017, when he got his big breakthroughs and the four tournaments that he won.

It set the tone for him for him becoming World No.1. As far as his game is concerned, I think he had it in him. I think everything needs to come together and develop the confidence to be prepared for big matches.

3.Our emphasis for a long time has been on the singles event, but in recent times, the doubles pairing of Chirag Shetty and Satwik have emerged and are giving the best a run for their money. Do you think that is now the next step, to continue the development of these players?

A: Of course. They have been doing very well. I think they are only one pair of a whole doubles system that has evolved in India. When we spoke about doubles a few years, when we said doubles was lacking facilities and they were not been taken seriously etc, we got in Tan Kim Her( Former coach of the Malaysian national team) as the doubles coach and slowly but surely, he has developed these doubles players. He has changed around a few combinations and brought them up.

If you look at Satwik and Chirag, they are 20 and 17 years old respectively. They started to play together a year-and-a-half ago. So it has taken them that much time of hard work to develop themselves. It would be difficult to pinpoint just one pair, I think the whole doubles system under him has evolved because there are other doubles pairs also have been doing well.

We have more options to choose from.

4.We are now entering into the singles phase in the Commonwealth Games. Who do you see the medal hopes for India in badminton in that event?

A: Saina Nehwal, PV Sindhu, Kidambi Srikanth and HS Prannoy. I think  Ruthvika as well (Shivani Gadde),why the brackets? if Michele Li gets knocked out somewhere, then maybe her as well, you never know.

The opposition isn’t too strong, but there are dangers lurking like the Malaysian players. But if we push hard, then two medals probably assured and an outside chance of a third.

5.Finally, Can we say with some form of clarity this is the best phase for Indian badminton? 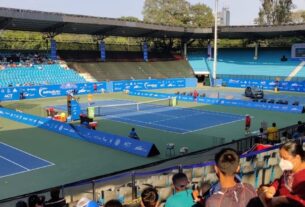 1 thought on “Talent, not age should be criteria: Aparna Popat”